The annual General Assembly of Eumabois, the European Federation of Woodworking Machinery Manufacturers, was hosted by the Polish Association DROMA on September 22nd and 23rd in Krakow. After 6 years as President and 3 years as Vice-President, Jürgen Köppel handed over the steering wheel of the European Federation to Luigi De Vito, Scm Group General Manager and SCM Wood Division Director, who has been supporting the Federation already as Vice President since 2016.

Frederik Meyer (Homag Group) is the new Vice President. The Eumabois Board of Directors was also renewed. The new Board with Wolfgang Rohner (IMA Schelling), Daniel Bucher (Striebig) and Ismet Toktas (AES Group), can count on a composition at the highest levels in the sector. Outgoing members Samuel Hänni (Lamello) and Mustafa Sabri Erol (Törk Makine).

Luigi De Vito said in his inaugural speech as the new President: “I want to express my best wishes to the new Board of Directors that will be in office for the next three years-term. My heartfelt thanks go to all the outgoing Board members I have worked with and who, in recent years, have contributed to bringing Eumabois to its current levels of quality and influence worldwide. Finally, a very special thanks goes to Jürgen Köppel, the years spent together have been fueled by a strong spirit of collaboration and mutual esteem and I can say that I am very proud of the work done together and of the results achieved."

In his farewell speech, Köppel said: "I am very pleased that such top-class representatives of our industry are supporting at European level and are thus driving our common European ideas worldwide. European woodworking machines and tools are setting trends worldwide and this leading position needs to be secured and expanded with the support of our Federation. I would like to thank everyone who has supported me in my work, especially I want to thank Luigi De Vito, because in the past 6 years of working together, he, as a former competitor, has become a strong comrade-in-arms and friend."

In the pictures, handover between Juergen Koeppel and Luigi De Vito and the New Board of Directors – from left Ismet Toktas, Luigi De Vito, Frederik Meyer, Daniel Bucher and Wolfgang Rohner. 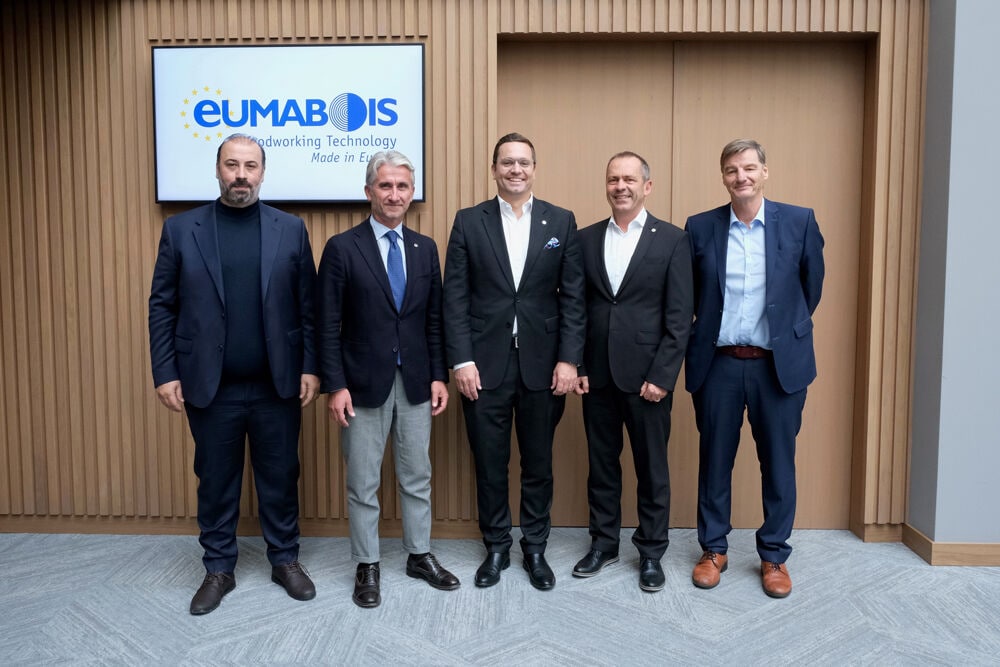