Parisi, a glance at the evolution of windows and doors, past and future

Luca and Nicola Parisi carry on the traditional excellence, handed down to them, which is more than a century old and 100% Italian. Dozens of different kinds of windows and doors produced each year, but always top quality, and with a strong positive approach to digital transformation. These are the strength points of this Trentino-based company and long-standing SCM customer. Some of its most recent purchases have been the windor nt1 angular machining centre, a real wild card for this 4.0 artisan company.

Innovation in tradition. This is the mission that has characterised the Falegnameria Parisi since its outset in 1905. From the first small artisan workshop established by two brothers Emanuale and Fortunato Parisi, the family dream continued and expanded over the decades thanks to the activity carried forward with passion and determination by the next generations: firstly Pasquale Parisi, followed then by his son Emanuele who then passed over command to his sons Luca and Nicola, who today respectively run the sales and production departments. At the same time, the head offices, now in Comano Terme in the province of Trento, were extended over the years and equipped with increasingly more advanced technologies and state-of-the-art software, an area where this company has been ground-breaking in this sector. So, a continuous evolution that has allowed the Falegnameria to specialise in the creation of top-quality windows and doors with particular propensity for wood.

Instead of mass production, the Parisi family opted for a niche market which, from private homes to tourist residences, focuses mainly on a sought-after, design product that has been custom designed and offers excellent quality. Over several decades, the Parisi windows and doors have earned the trust and admiration of both wood specialists, for whom they do contract work and of private individuals who represent the largest segment of the market. Their target audience has also expanded beyond the region of Trentino thanks to word of mouth.

Luca Parisi describes the details of these windows and doors, produced mainly in fir lamellar, larch and oak. "We produce three macro profile categories, from the most rustic to the most modern, but our work is then customised and tailor designed around the requests and taste of each individual customer". More traditional-style windows and doors as well as arches and portholes: Parisi's windows and doors undoubtedly offer all-round beauty and technical specifications. The result is a product portfolio with around forty varieties, including windows for passive houses with greater performance.

The partnership with SCM

The company's production process is now fully automated. All it takes is an operator who feeds in the semi-manufactured pieces of lamellar at the start of the line and then everything proceeds autonomously following the instructions from factory management. Once the four elements processed at their end and profiled on the sides are finished, they are transferred to the clamp to produce the frame. This is followed by all the finishing and painting work.

"SCM technology has helped us boost figures, be faster and better performing, with average delivery times of one month, and to considerably improve our work environment to ensure safe working conditions for our workers" explains Nicola Parisi. But, above all, SCM also guarantees production flexibility to simultaneously work on dozens of different orders in terms of type, measurements and thickness, to mention but a few.

Thanks to windor nt1, SCM's angular machining centre for windows and doors, Falegnameria Parisi has managed to concentrate all the useful functions needed to manufacture window fixtures into a single compact machine, as well as produce significant numbers of up to 20-25 windows per day.

Flexibility is one of the advantages highlighted, especially at the tenoning stage; it is possible to fully automatically pass from machining one side to another with the rotating movement of the presser which allows a downtime reduction.

The number of tools available also varies considerably. The machine has interchangeable spindles with HSK attachment which guarantee extreme ease of use, rapid adjustments, excellent performance and high finishing quality. Other advantages are guaranteed by the OPTIMA 1 drilling and routing unit (in tenoning) that enables all accessory machining to be carried out, such as handle drilling, turn and tilt drilling, glazing bead cut-off, top and lengthwise drilling.
Thanks to windor nt1, Parisi had access to the industry 4.0 technological services to acquire in real time, as well as trace over time, all the information and data on machine performance and its condition; this model, as is the case of other SCM machines used in the factory, is also integrated and connected to all the other machinery, as well as with the technical department.

Falegnameria Parisi and SCM: a partnership constantly projected into the future.

In the next edition of Sistema Serramento (https://www.webandmagazine.media/pubblicazioni/sistema-serramento/ ) an extensive article on Falegnameria Parisi and its long-standing collaboration with SCM. 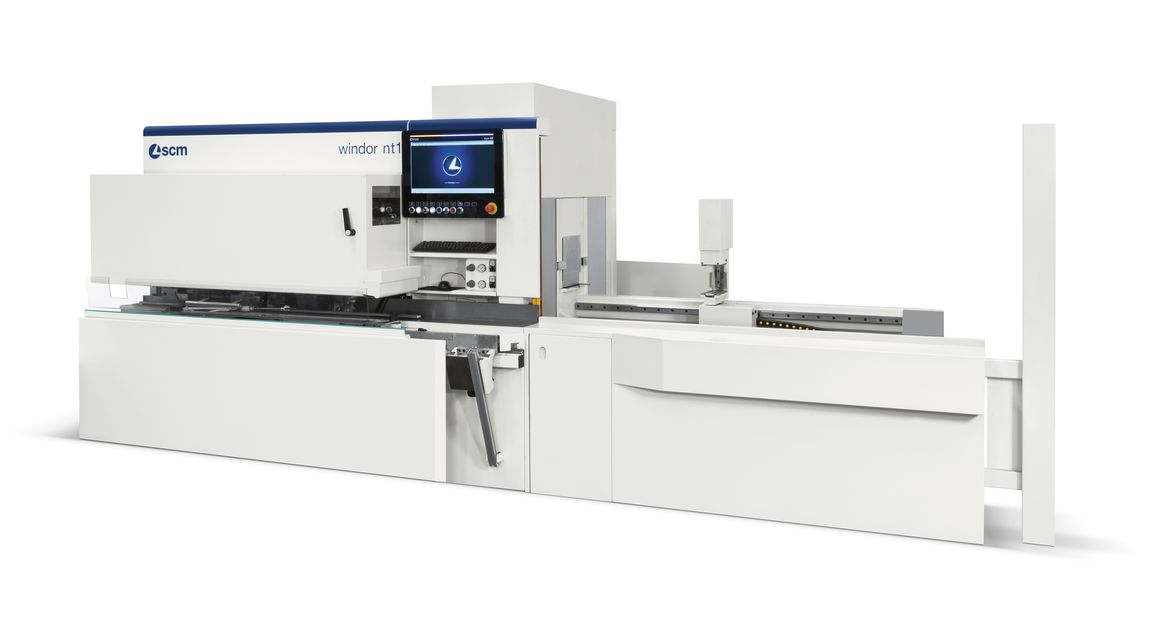 Angular machining centre for doors and windows frame manufacturing. It is possible to perform all of the essential operations of end-cutting, tenoning, drilling-routing and profiling regardless of construction concept, joint and section type. The machine...