Visiting the Giorgetti factory is always an exciting moment. A historical organisation dating back over a hundred years and one of the most important brands in made in Italy furniture. On this occasion we are here to run a reportage on the balestrini idea machining centre that has been operational at the company since last year. We are welcomed by the General Manager, Fausto Citterio who talks to us about this high tech. solution in the context of a reality - the 4.0 Industry - in which he is enthusiastically investing a great deal.

SCM is a long-standing supplier to this company with its balestrini models. "We have invested in this new machining centre - confirms Citterio - making the most of the tax relief offered by the 4.0 Plan, with a view to using it for the research centre and dedicating it, beforehand, to the prototyping stage. Nowadays, the procedure for creating prototypes differs greatly from the past: we start with drawings and renderings by the architects which means we can rapidly develop machine programs and, as a result, a highly evolved piece is produced. Not so many years ago, we would have started out with a cardboard shape, something that was just a sketch. Nowadays, the first prototype already closely resembles the finished piece both in terms of material and shapes". The company also uses a 3D printer before sending the rendering to the machine.

"The younger members of staff who have replaced those recently retired are much more familiar with designing on evolved tools. While I am confident that Giorgetti in ten, fifteen years time will still be selling its furniture, I am not so sure that there will still be the skills to carry out this kind of work. This is why it is important to train young people. So, we have established close. on-going links with a school as part of the work placement project: the youngsters in the laboratory are all young and, when the students visit the company we explain to them that those working for us are driving machines that cost more than a Ferrari".

Giorgetti also underwent a move from artisan work to a more industrial production method. "The care and raw materials have not changed because the presence of solid wood in the Giorgetti collections has remained unaltered - continues Citterio -. Its processing method has definitely changed. We now achieve shapes that are extreme even if there is still a certain number of items that cannot be produced at industrial level and need to be shaped by hand. It is important for us to create a product that can be produced at industrial level with a high artisan content.

So, SCM machines are an essential part of this mission in our company.

"Technology becomes essential, not only because the new generation is much more in tune with evolved working modes, but also because it allows us to grow in precision and speed".

With this in mind, Giorgetti made a number of different investments last year. "We purchased machinery to include in the production systems and, as well as this integration, a new organisation was established which allows us to work better, managing relations with suppliers, the integration between the machines and big data, benefiting from the possibility of mapping the warehouse and work progress, unloading, pieces, storage management and everything linked to it. At the current time we are working to integrate the machines with one another. Being slim line allows us to free up resources to dedicate to core business work. When selecting our latest investment, balestrini idea, SCM seemed to be more in step with these current needs".

Generational change, change of skills and change of approach: so the need to equip ourselves with the right tools that are useful and correct in ensuring these talents can expressthemselves. "The current operator - continuesCitterio - was head of the laboratory, bearing in mind that we had decided to focus on a young person to change the production approach, his best skill was his all-round knowledge of so many of our processes and process software. We have invested in a numerical control machining centre that gave this person the chance to work to the best of his ability, increasing precision so that we had a product that was as close as possible to the original in as short a time as possible. The production of a new armchair was introduced last year and its prototype involved the use of the production machines. This is why we felt it was essential to introduce a reliable machining centre like to balestrini idea into the prototype department: thanks to its speed and flexibility, we can achieve prototypes and relative production processes, and subsequently integrate them easily into the actual production process." Balestrini idea is our compact machining centre fully fitted with SCM technology, like the liquid cooled electro-spindles and the extraction worktable. The added value that the machine provides to the prototype process is the optional "lathe axis", a centre/ tailstock device that allows the entire perimeter of the piece to be worked: this saves time with fixturing, the construction of templates, programming and adjusting at the end stage of the prototype finishing. "This solution has given us a chance to perform a series of processings that have improved the outcome even at production level. Today, if we are talking about SCM and Balestrini models it is because they are a reliable partner with a lengthy history and have been around for so long. SCM's strength as well as its intelligence in embracing the balestrini brand buying out the company of the same name,was as to mantain the skills, technology and experience matured by such an important local organization and with a series of essential positive aspects to create and develop top quality machines". 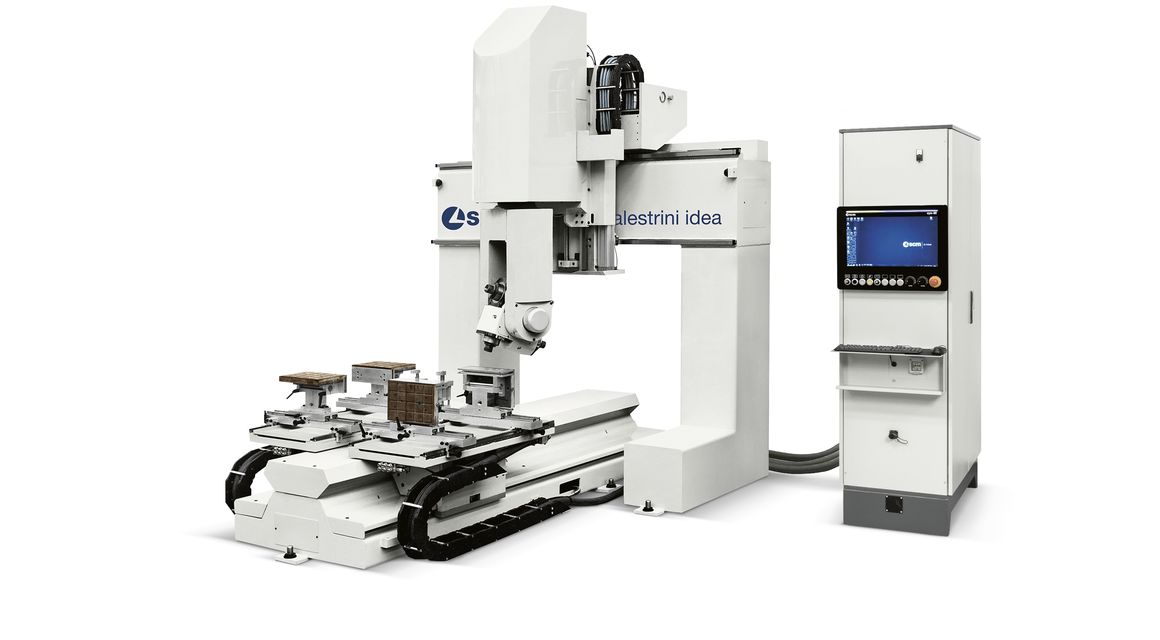 balestrini idea is a 5-axis machining centre with fixed gantry structure, single machine bed and one or two independent mobile worktables. It is the ideal solution for interior and exterior furniture manufacturers, who need ease of use,...