Utopia’s Stefani XD is equipped with some rather special features that provide edge perfection and additional benefits.

Making bathroom furniture is the preserve of perfectionists. There’s water to contend with – lots of it – and there’s steam. If your quality control isn’t super tight, sooner or later water ingress will catch you out and the returns will flow back in a steady stream. At Utopia Group, they’ve developed quality control procedures that include examination of doors and panel components in microscopic detail, and that’s given them a unique perspective on the machinery and processes that work and those that don’t. The expectation of Utopia’s dealer network is that perfection and reliability will come as standard, so when Director David Conn and Production Engineering Manager John Phelps invest in a new machine, they choose it carefully. Very carefully.
The introduction of a new Alpine White door might not sound like a major task for production but, as John Phelps reports, it proved to be the catalyst in a decision that resulted in the purchase of a brand new stefani xd edgebander. “We wanted a really good finish with no join between the edge and the face. The finish was good but it didn’t seem to matter what we did with PUR, it wasn’t quite good enough. That’s when we started looking at AirFusion+.

“We went to the W exhibition and saw a number of machines in action. SCM’s Stefani engineer, John Wilson, gave us a demonstration of AirFusion+. We liked what we saw. SCM could supply a machine that would run at 25m/min and the heat up time of SCM’s Air Fusion system was just 30 seconds from cold to 350 degrees. Compared with other machines on the market, that was fast.
Typically, you’d expect a hot air unit to heat up to 300+ degrees in about 20 minutes – and we saw several of those in action as well. SCM had a stefani xd in stock at Thiene, and it was already equipped with the tooling we required and could be supplied in six weeks. We have other SCM machines in the factory and know them to be good, so we placed the order.”

Utopia’s Stefani XD is equipped with some rather special features that not only provide the edge perfection Utopia wanted on their new flat Alpine White door, they also bring additional benefits.

Some readers may well remember the Innovation Award Stefani received for its SGP gluepot at Xylexpo around four years ago. Utopia’s Stefani XD has this, and it basically means the operator can switch from using PUR to the hot air ‘AirFusion+’ glue system in under a minute. “The SGP gluepot has a fast purging system,” explains engineer Jon Wilson. “The old systems needed wax to purge through, nitrogen gases, etc. The new system is a sealed gluepot, so the only thing exposed overnight is the roller. When the operator comes in on a morning, the only thing he needs to do is start up and heat the gluepot. The glue roller starts rotating. There’s an automatic purge button on the software that will purge and scrape the skin off the glue roller. That takes 5-10 seconds, then it discharges the glue into a pot. Press the button again and the PUR is clean, warm enough and you’re into full production. You can leave this overnight, or over a weekend. There is no need for waxing out processes until shutdown for Christmas.”

One problem John Phelps really wanted to overcome was the edgebanding of doors that had been drilled ready to take hinge cups and components that had been grooved to accept mood lighting strips. Over the years, his operators had become skilled at taping over grooves and making plugs to fill gaps so nested components could be taken straight to the edgebander from the CNC router for finishing. But, as he says, it was taking a huge amount of time, often demanding additional work at the bench to ensure a standard of finish that would pass all Utopia’s quality control checks. What he really needed was a nesting lock that would ride over them and get it right every time. Many edgebanders can be equipped with nesting locks but Stefani’s solution was both unique and particularly effective. John Wilson explains how it works: “With a nesting copier, if Utopia produces nested components on the CNC, they can machine the 35mm hinge inserts and the copiers at the top inside the edgebander don’t dip into the panel and damage it. There’s a locking system on the nesting copiers that follows the zero profile of the panel so it comes off consistent in its finish. It’s a new system we’ve developed. We used to use three tracer wheels. The first and last tracer wheel would always sit on the panel and not dip in. We’ve now devised a locking system with a single tracer wheel that has a thickness of 20mm. It measures the panel off the centre and locks on the zero of the panel – the top or the bottom of the fascia – giving a perfect finish to the edge regardless of any drillings on the panel.”

Also key to the decision on which machine to buy was the stefani xd’s ability to cope with smaller components. Officially, the smallest panel it’s mean to be capable of edging is around 84mm, but the remarkable stefani xd is consistently making light work of 63mm components. “On the top pressure beam, there are no rubber rollers,” explains Jon Wilson. “It’s a belt system. The smallest

panel it is supposed to be capable of processing is around 84mm but Utopia is doing 63mm at the moment. It’s holding it without twisting as it goes through the machine and it’s still giving a 100% finish.”

Every unit inside the stefani xd is NC controlled and set from a one-touch controller. There’s no manual adjustment to be done inside the machine – and that’s a feature that was particularly important to Utopia. Even if production needs to alternate between flat panels and grain-effect panels, the axes move the tooling and it’s easy to change the parameters by as little as 0.1 of a micron to accommodate different panel thicknesses. As the panel enters the machine, an LPZ-2 anti adhesive spray is applied to the top and bottom before it goes through a pre-milling section that prepares the board in readiness for tape application. Tape is supplied automatically from a multi-roll magazine and feeds through the AirFusion+ or the PUR system, depending on the bonding you want to use. Channel one is loaded with edging for AirFusion+, leaving the second channel free for ABS or PVC to be applied with PUR via the SGP gluepot. Next, pressure rollers force the melted edge into the panel and over the edges, top and bottom. It’s then sprayed with an NFly cooling solution that cools the polyurethane prior to it going through the machining section, so you’re not machining soft edging and can create a precise finish.

The panel then goes through to the end trim process which cuts the front and back, then the top and bottom. Utopia’s machine is equipped with a multi-function tool that allows the operator to switch from 2mm, to 1mm or 0.8mm at the touch of a button. The one-touch controller automatically changes the radius of the tool. The edge scrapers are at the back of the machine and they remove a 0.1-0.2mm profile – just enough to get rid of cutter marks left by the four-wing cutter in the ED system tool.
Then the panel passes through a flat glue scraper that removes excess residue before the panel reaches the buffer sections that polish and blend it using LP163 solution. “LP163 is a Riepe solution, but we’re doing tests with the Ostermann all-in-one solution that is alcohol-based and evaporates off the panel as it comes off,” says Jon Wilson. “When the panel comes off the machine, there’s no residue left on the protective plastic film. It cleans the panel and evaporates into the air.”

And herein lies another problem Utopia’s stefani xd addresses nicely: there’s a flat copier on the corner rounder rather than a rotary copier that might rip the protective film from the surface of the panel. The edge is sprayed with the slipping agent, N-Fly, to aid finishing, so when the panel comes off the machine it’s ready for the fitter to remove the film.

John Phelps is delighted with SCM and with the new Stefani. “We’ve always had a good quality finish from SCM machines and they are very reliable,” he says. “We have one machine that’s knocking on 20 years old and its probably one of the best edgebanders we’ve got. We always get

tremendous support from Jon Wilson and the training we’ve received with this machine has been first rate. It’s covered the software and programming, mechanical setup of the stations, removing tools, maintenance, greasing points – anything the guys can check for or fault find – and concluded with two days of full production so we knew everything was 100%. You can’t ask much more than that can you?” 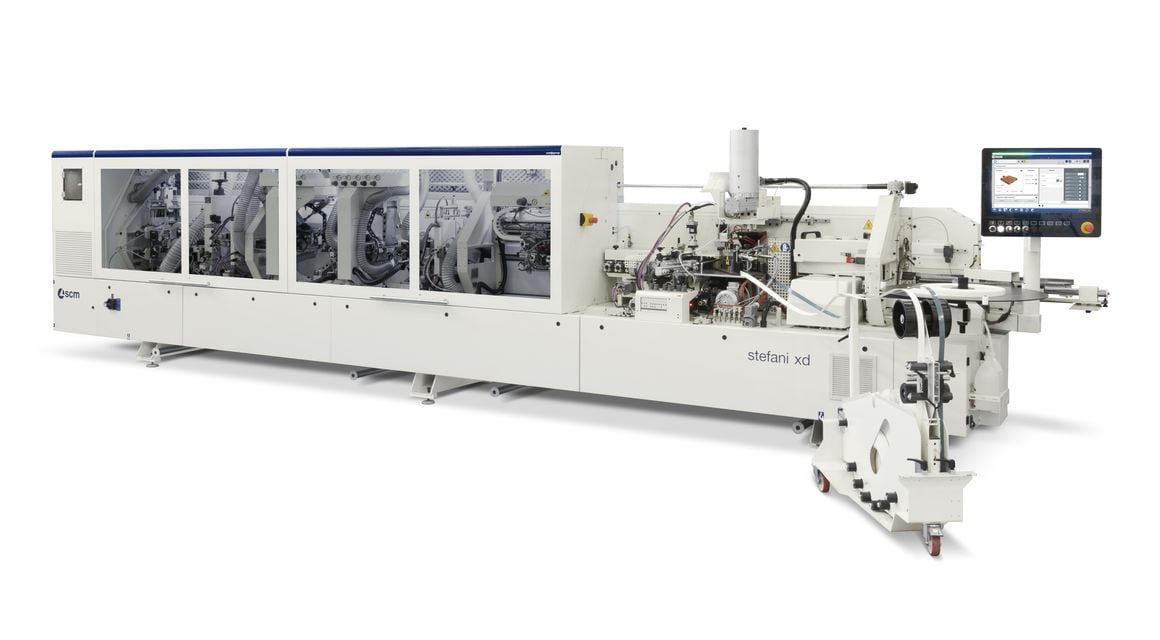